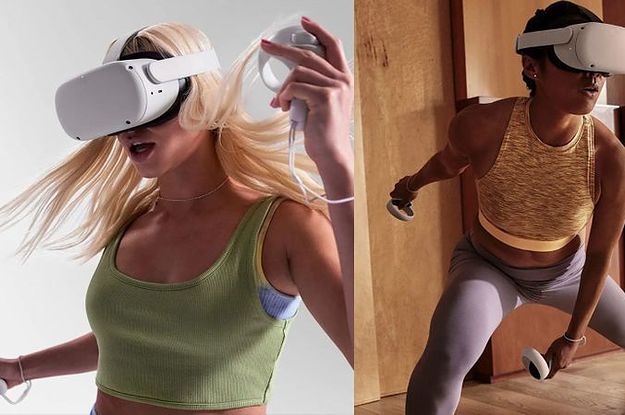 “That… workout ain’t no joke,” said VR TikToker @KeemKong85, who filmed themselves doing a boxing game called Supernatural with a Lizzo soundtrack. A user with the handle @vikingprincessvr used ankle and wrist weights for a full body toning exercise as she played the rhythm game OhShape, bending to “get” coins and moving her body into shapes that corresponded to the game’s instructions.

With most of these devices, users simply put on the padded and lightweight adjustable headset, choose an activity either on the headset’s interface or on their phone, and complete a workout. Headsets like one from Meta allow you to set up a virtual boundary inside your physical space so users don’t kick a table or run into a wall.

If this sounds like an expensive undertaking, know that there are options at almost every budget. The Meta Quest 2 headset is currently the highest rated and most well-known self-contained wireless VR headset with handheld controllers that doesn’t require a smart phone, PC or any other kind of console to operate, and it clocks in at $399, but options like the The Feebz VR headset (third in the list below) offer the same amount of portability for under $50. It just requires your phone to fit into the VR goggles.

If you’re getting the feeling that a VR headset could genuinely supplement your existing fitness routine, or help you get excited about starting one at all, keep keep reading to see the Meta Quest 2 and other headsets at a variety of price points.