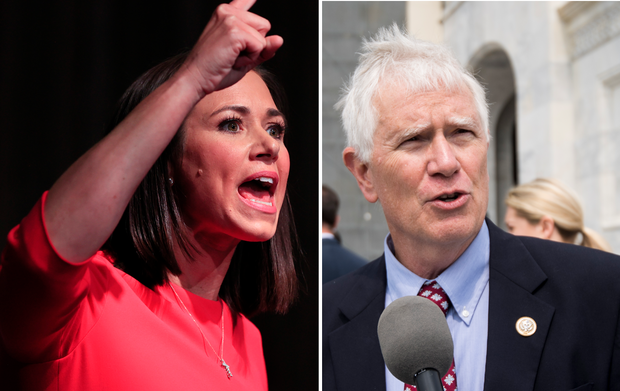 In her election night remarks, Britt thanked her family and supporters, including Arkansas Sen. Tom Cotton, Arkansas GOP gubernatorial nominee Sarah Huckabee Sanders and finally, former President Donald Trump. “So many people across Alabama miss his ‘America first’ agenda, and we are going to go to the United States Senate to fight for it each and every day,” she said.

Brooks may have conceded, but he had no kind words for the woman who defeated him. “We are sending to Washington, D.C., the exact opposite of what we need in the United States Senate,” he said. “But folks, voters have spoken. They may not have spoken wisely. They may have been seduced by brazenly false advertising. But nonetheless, they have spoken, and I respect their will.”

The two candidates shared the unusual distinction having both had — at one point — the sought-after endorsement of former President Donald Trump. Brooks, who was a longtime Trump ally, won his first endorsement, but Trump withdrew it just before the primary election on May 24, when polls showed Brooks sliding in the polls.

Brooks continued to embrace Trump’s 2020 election denialism, and he also suggested at a Trump rally last August that Republicans should look ahead in 2022, rather than re-litigating the 2020 election results.

When Trump withdrew his support from the Alabama congressman, he cited those comments and wondered whether Brooks was going “woke.” Earlier this month, Trump switched his endorsement to Britt, and Brooks scoffed at Trump, saying that he had “no loyalty to anyone or anything but himself.”

Despite his loss of Trump’s backing, Brooks rose in the polls from third place and made the cutoff for the runoff with Britt.

Mayor Muriel Bowser won the Democratic mayoral nomination in Washington D.C., according to the Associated Press.

Jen Kiggans won the Republican primary in Virginia’s 2nd Congressional District, so she’ll face incumbent Rep. Elaine Luria, a Democrat, in the general election. Luria’s district remains slightly conservative after the latest redistricting cycle. She’s currently serving on the Jan. 6 House select committee investigating the assault on the U.S. Capitol, a role which may attract negative sentiment from conservatives in her district, but she recently told the New York Times, “If I don’t get re-elected because of this, that’s OK.”

Luria has more than $3.7 million cash on hand. In a statement after Kiggans’ win, she called her “a political opportunist” and “an election denier.” As a state senator, Kiggans voted for an amendment that would create a $70 million “forensic audit” of the 2020 election. She also helped pass a bill that would require a state department to report deceased Virginians to the state’s election’s department in order to update voting rolls.

“The people of Virginia’s Second Congressional District trust Elaine Luria and know that she will continue to deliver and do what’s right regardless of the political implications,” Luria added.

The House GOP-backed Congressional Leadership Fund endorsed Kiggans in the primary and has booked $2.3 million in ads for the district this fall.

Yesli Vega wins the Republican primary in Virginia’s 7th District, prevailing over five Republicans to challenge vulnerable Democratic Rep. Abigail Spanberger. The district encompasses part of the Northern Virginia suburbs of Washington, and is a relatively new area to represent for Spanberger.

Vega had won the endorsement of Texas Sen. Ted Cruz, who stumped for the Prince William County Board of Supervisors member. Vega is also a former Alexandria, Va., police officer who was also backed by Ginni Thomas, the conservative activist and wife of Supreme Court Justice Clarence Thomas.

If Vega wins in November, she would be the first Latina congresswoman in Virginia’s congressional delegation.

The two candidates had been attacking each other on a personal level since the primary. Collins’ campaign set up a website and handed voters rape whistles with Jones’ name — to highlight that Jones was accused of sexual assault 17 years ago.

Bee Nguyen won the Democratic runoff for Georgia’s secretary of state. She faces incumbent Republican Brad Raffensperger in November’s general election. Nguyen was backed by Democratic gubernatorial nominee Stacey Abrams, and if elected in November, would be the first Asian-American Democratic woman elected to serve statewide in Georgia.